An interview with RUNNY

Runny are a mercurial group of Brooklynites playing dramatic, sexually deviant punk rock straight out of the Dwarves / Poison Idea archive, all the while channeling a Gibby Haynes lust for naked mayhem. I can't help but love them. I want to bus their drinks and drugs around the practice room while they wail about all things cheap and mind altering.

How we managed to get this interview is beyond me. You can download their latest record 'We've Come For Your Women (And Some Of Your Men) for free from their site. Get it here 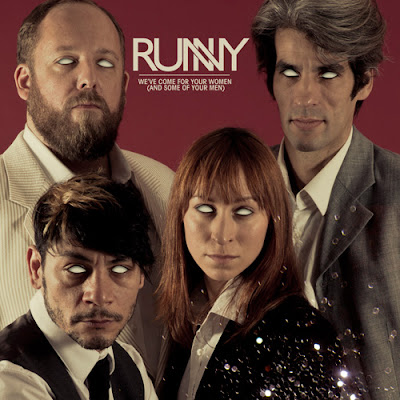 What were the beginnings of Runny like? Have you all played in bands before?

Lemon Cookie: Runny started in 1993 and has been through a million changes... we've always been a punk rock mess, but it's manifested itself in a number of different ways: It's been a DJ / Guitar act, an acoustic & wig-based mess, a CD-player performance art thing (that sucked), and its current version. Everyone has played in a ton of other bands - right now, Colonel Cream & Cracker Dap playing in The Whores and Cupcake plays in the Pioneers of Seduction.

Colonel Cream: In 2008 Cracker Dap and I were kidnapped, drugged, and put through a Runny re-education program. When we came to we discovered we were the rhythm section of Runny. It's been downhill since. Won't someone please help us?!

LC: Easy there, Colonel. Help is on the way.


Kidnapping and re-education programs aside, you all seem rather connected on a personal level, what with the sweet tooth nicknames and the shared sense of humour.. is that an important part of the band's ethos?

LC: The only ethos we have is to have fun together. We're only in this for good times, bad drugs, groupies & groupers. The names are just to protect our real identities!

CC: It's true. We're only in this for fun and cheap sex. In all seriousness though, I love my 'mates so much. This is just our excuse for getting together several nights a week, drinking, and shredding our vocal chords on lyrics like 'I JUST WANNA FUCK'. It's quite satisfying.


Is it important to you to be identified as a New York band?

CC: Actually, I'm not sure New York would like to be associated with us. We recently received a cease and desist letter from the NYC District Attorney ordering us to remove any mention of this fine town from any band promotional materials. This interview doesn't count because it appears in the UK, right?

LC: Yeah fuck those guys… That's why we don't want to be identified as a New York band, even though we're all from Brooklyn and its tough not to be influenced by all the amazing bands we get to be around. Hey Colonel, how's my grammar been lately?

LC: I blame that on New York.


Yeah, well, I am the UK arm of this blog, the other half is ran from Los Angeles. The New York scene is considered by many cognoscenti to be one of the strongest scenes going right now, particularly the hot mess of sounds coming out of Brooklyn, so despite your rejection (or NYC's rejection of you) do you not feel an affiliation with say, The Men, Crazy Spirit, and the others?

LC: Actualy, Bob Johnson from Scenic just played me The Men the other... it's good stuff. But we're more in JD Samson's band MEN.

CC: There are some mind blowing bands out here right now. "Don't" is one of my new favorites. Also love Bugs in the Dark and of course our cousins, the Naked Heroes. Yeah… New York City is like no place on earth. It's still magic to me.


I can't imagine what the recording sessions must have been like. Is it all fun and games or is there a definite overriding sense of seriousness?

LC: George was insistent that we go into the studio fully rehearsed so we can bang out the tracks. So the first day was fairly professional. The day of the mix I got so drunk that I could barely stand up. That wasn't so professional.

CC: George and Alap were just amazing, total pros. It was the best experience I've had recording so far. I can't say I ever felt too serious though...hard to when you're banging like hell on the drums and screaming about sucking on the wrong dick.


Sexual deviancy aside, what are the root influences for this project?

LC: Sexual deviancy really is 90% of it. Also, social anxiety & a complete disdain for actually knowing how to play our instruments. Bands wise, though - we worship a ton of different stuff: Swans, Melvins, The Dwarves, Future of the Left... And, like, we just played with this band Agitator who were fucking amazing.

CC: If you listen close, you'll hear the influence of Mahler and Debussy in my drumming. Poor guys are spinning in their graves.


'We've come for your women..' is a total slab of punk rock, but with a glossy, well produced veneer. Is this something you were conscious about when recording?

LC: Nope! Our good friends George Michael Jackson from the Naked Heroes produced it and Alap Momin from Dalek engineered it. Both those guys know what they are doing and what they wanted it to sound like and we trusted them. We recorded and mixed in two days and came out with that fury.

CC: Recording that album was one of the most intensely pleasurable experiences I've ever had. I found new levels of scream and have George Michael and Lemon Cookie to thank for that. It was quite a three-way. Please don't tell George's wife. Looking forward to our next trip back to the studio...


What are you all listening to right now? Give us a rundown of what's had most turntable time for you guys.

LC: I've been on a grind kick lately... Baptists, All Pigs Must Die, Nails. But I dig that new Ceremony record and then mellow shit like Dntel or Gil Scott-Heron. And I love that Kendrick Lamar record from last year.

CC: I am obsessed with Harvey Milk, Chokebore, and again, Future of the Left. If their drummer is reading this...I have plans for you.


Ceremony are friends of ours so I'll pass on the compliments. Do you ever see yourselves moving away from the sound you've honed now? Or is it all about perfecting the racket and doubling up on the sexual innuendo?

LC: We're gonna go where we are gonna go. There is no destination. And all the shit that's being written now is slow and dark. Less party, more hangover... Hey Colonel, that could be a new album title!

CC: That idea sucks, dude. But to your question, Josh, every once in a while a weird & mournful groove comes out. We've even been known to make a jazz noise.

LC: Yes and it's usually when I hold the mic to my ass and fart real loud.


Do you ever see yourself taking this show on the road? I'm sure Europe would welcome you guys with open arms

LC: All I want to do is get back on the road. We were in Spain in September and it was the best fucking time ever. Anyone who wants to bring us over, feel free to holler.

CC: DYING to go back to Europe on tour. Spain was incredible. And we want to come to the UK! I've been tested and my doctor says I'm now cleared. Get ready, because we really are coming for your women. And some of your men.


Haha, the UK would be down for Runny. I'm curious as to what kind of bill you guys feel comfortable playing on.. is it a case of curbing the mosh on the more hardcore flavoured line-ups or do you get the chance to play with more like-minded late 70's orientated punk rockers?

LC: Weirdly enough, our best shows are with bands that don't share our sound. Our best shows have been with metal bands or hiphop acts or jazz quintets, or with the aforementioned Naked Heroes. Strange how that works.

CC: So true! But our favorite crowds are the ones that are comfortable getting naked and piling up on the floor in front of the stage.

LC: And preferably on drugs. Lots and lots of drugs.

Pagan Punx
Sam James Velde of "The Power Of The Riff" festivals, Josh Turner, London based British writer and general Punk enthusiast and Thom Flattley, a photojournalist and noise musician behind the 'Pissing Through' project based in Leeds